Do you know how to Manage Oxygen?

Hovering over a reef, camera in hand – you see that juvenile spotted drumfish that you’ve been chasing for the last half hour. Finally, he has come out into the open and is parked in front of this spectacular purple sponge and bright orange anemone. Your frame is set; lighting is good. Your underwater model is cooperating. “BEEP BEEP BEEP,” your computer is telling you that you’re entering a danger zone and are at risk for oxygen toxicity. It says your “PO2 is 1.4.”

Not critical, but a good alert nonetheless. Glad it went off. Fortunately, the alert didn’t scare away your drumfish. You posture to take the picture. SNAP! Your strobes light up the reef, and your drumfish heads back into the protective crevices of the boulder coral below. As you peer into the camera’s view-screen, you think, this one is going on the wall in the office. A great shot! It’s time to head back up to a safer depth and make your computer happy.

The air we breathe, both while walking on land or compressed into a scuba tank, is comprised of two major gases and a small collection of trace gases. The most prevalent gas in our breathable air is nitrogen, which equals 79%. Oxygen, which is the gas that our life depends on, is a mere 20.9% of the gas we breathe. The 0.1% left over is made up of a bunch of trace gases, many of which, like nitrogen, are inert and have little effect on us normally, while walking on land. While this blend is harmonious and life-enabling, it all changes once you add pressure while scuba diving.

Nitrogen – the evil gas!
From the first day you strap a scuba tank to your back, you hear about nitrogen narcosis and decompression sickness. In some cases, instructors scare you into memorizing the causes to reinforce the notion of managing your nitrogen. Simply put, nitrogen narcosis is caused by the combination of depth and nitrogen absorption. When you reach a depth, usually below 100 feet, if your physiology isn’t cooperating, you may get “narced,” an intoxicating feeling that may impair your judgment. The deeper you go, the more susceptible you become to narcosis. At some depth, everyone gets narced. Decompression sickness is more severe and requires proper planning in order to avoid getting the “bends”. Decompression sickness is not caused by depth, it is caused by loading nitrogen into your body. The deeper you go, the faster you will load nitrogen. At some point, you will load enough nitrogen where you will need to control the off-gassing prior to surfacing. These we call decompression stops. If you load enough nitrogen and forego a decompression stop, it is highly likely you will get bent. Even a mild case of the bends is painful and perhaps even life threatening. A severe case can, at best, cause permanent neurological damage and it’s highly possible you could die from it.

Thus, from your first day, you are taught by your instructor to manage your nitrogen levels using a dive computer or by using dive planning tables for “No Decompression Limits.” In either case, you are planning your dive so that you are not needing decompression stops. Nitrogen management means you have planned your dive to not max out your nitrogen loading. Additionally, you are taught the symptoms and cures, for you and your buddy, on how to combat, avoid, and relieve nitrogen narcosis. By the end of your beginner scuba diver class, you are proficient in nitrogen management, staying away from getting narced, and planning your dives to stay away from even the mildest case of the bends.

Oxygen – the good gas?
If nitrogen is the bad gas and oxygen is the life giving gas, then oxygen is the good gas, right? Well, oxygen is generally the good gas. You definitely need it to live. However, oxygen epitomizes the saying, “too much of a good thing can be bad for you.” In fact, there are times when too much oxygen can be as deadly and hit you faster than nitrogen. Oxygen is the good gas with some really bad character traits. However, as a new scuba diver, we never hear about these bad traits. In fact, until we start looking into Enriched Air or Technical Diving, we never even hear that oxygen could be a bad thing. Oxygen has toxic characteristics when it has a high partial pressure. This is called CNS Oxygen Toxicity. Oxygen can also have toxic characteristics if you have prolonged exposure to high partial pressures. This is called Pulmonary Oxygen Toxicity. In either case, the effect is generally the same, getting a “Tox Hit” usually means that you will have a convulsion. In fact, in hospital wards, this happens fairly frequently. Most people have no problem surviving them. However, underwater a convulsion can be deadly. A convulsion generally leads to a diver’s regulator falling out of their mouth, passing out, and drowning. 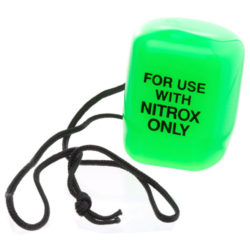